Wilford Woodruff was a man who loved to fish.  He also loved to hunt and to be out of doors.  He fished with rod and tackle but he even talks about catching fish with his hands also.  It could rightly be said he was an avid fisherman. 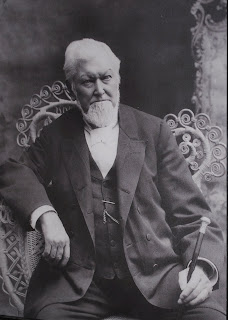 Then in 1833 Wilford came into contact with Mormon Missionaries and found something he had been searching to find for a good number of years.  He joined the LDS Church and became a fisher of men along with fishing for fish.

In the years following he served several missions to England where his success as a fisher of men was phenomenal and while in England he was introduced to fly fishing.  That was something he had not encountered before and it so fascinated him that he spent as much time as he could learning, practicing, and become proficient  as a fly fisherman.

Something I found very interesting is the length of the rods that he talks about.  Those in England he associated with were using 10-12 foot rods and sometimes longer.  I have been fly fishing since I was about 10-12 years old and I was using an 8 foot rod to begin with and then went to an 9 foot on this last one I bought and I thought that was long.

However it is much easier working and throwing the line with the 9 foot than with the shorter rods, I am not sure if that is the length or the quality of the rod.  Anyway he was using longer rods and brought several of them home to this country with him and he used them as often as he could.

As the years progressed he continued his fly fishing and tying his own flies.  He even had a fly that he tied and named the Woodruff.

When the time came that the saints were moving to the west, The Great Salt Lake Basin, Wilford was among the first group of wagons and settlers to travel West.  On the way as they were crossing Nebraska he went fishing in a stream  one evening and he caught 10 speckled trout.  He named the stream Trout Creek because of the fish he caught.  I don't know if the name stuck though.

The wagons then crossed into what is now Wyoming and crossed an area of alkali and brackish water that was miserable at best.  As they approached Fort Bridger they entered the area that is now know as Sweetwater County in Wyoming. They camped one night on what was probably Henry's Fork  and after the camp was setup a good number of the men went out to try to catch fish hoping for some fresh meat to eat.

Wilford records in his journal how he also went and found a nice clear pool in the river and he records that as he threw his fly out on the water he watched with as much anticipation as Ben Franklin must have had as he flew his kite.

I am not sure what Wilford fished with in Nebraska but he notes in his journal that in this instance that it was the first time he had used the fly on this journey and the first time he had seen it used in this country.  There was a publication several years ago where one of the sports magazines attribute Wilford as being the first person to use the artificial fly west of the Mississippi River.

Anyway, he expresses his excitement and the thrill of watching a trout dart from the shadows and take his fly.  In all he caught a dozen fish all about a pound each and when he returned to camp he found the rest of the camp had caught only 3 fish amongst them all.  To which he says only proves that the artificial is by far the best thing to fish with.